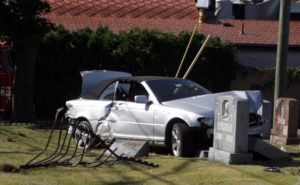 HACKENSACK, N.J. (WABC) — A car crashed through a gate at a cemetery in Hackensack, New Jersey Thursday morning.

The BMW came to a stop 25 feet into St. Joseph’s Cemetery after crashing through a wrought iron fence and knocking over nearly a dozen marble tombstones.

“I was standing right here in the middle talking to a customer,” said Ahmad Jaber, an eyewitness.

Ahmad Jaber owns the auto spa just across the street. In the video from his surveillance camera, you can watch his reaction as the car goes whizzing past.

He says you had to see it, to believe it.

“I heard the screeching noise and I saw a silver BMW traveling north, and it was a little high speed, lost control, tried to bring it back to the road, he couldn’t, ended up into a truck, a white Nissan Altima, and then ended in the cemetery, knocked down the stones right in the corner,” Jaber said.

The driver was not seriously hurt, but was later charged with careless driving and running a red light.

It happened on a stretch of Hackensack Avenue that is two lanes in each direction, where traffic routinely moves at well-over 40 miles per hour.

“It’s a school zone, they have a 25 miles per hour limit only when it’s flashing, but it’s still going the high speed,” Jaber said.