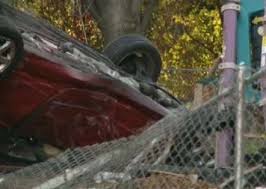 Firefighters are used to being called out to nighttime vehicle crashes, but a Tuesday night crash occurred almost on the doorstep of a Rancho Cordova fire station.

Just before 11 p.m., a vehicle westbound on Folsom Boulevard crashed through the chain-link fence between the Sacramento Metropolitan Fire District’s Station 63, at 12399 Folsom Blvd. and the neighboring Chevron gas station. The vehicle then slammed into Station 63’s front gate, bending it and forcing it open, according to a Fire District news release.

The fire crew heard the crash from inside the station and ran out to help. But the driver, who was not injured, backed the vehicle out of the driveway, crashed into a telephone pole, drove across the lawn and continued down Folsom Boulevard.

Rancho Cordova police found the vehicle a short time later, towed it and cited the driver.

Fire district officials noted that the situation could have been far more serious if the vehicle had crash into the busy gas station next door.